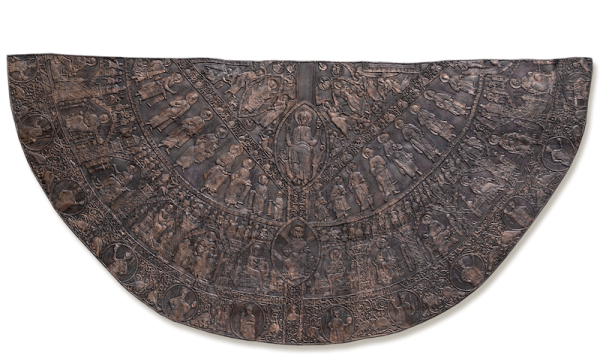 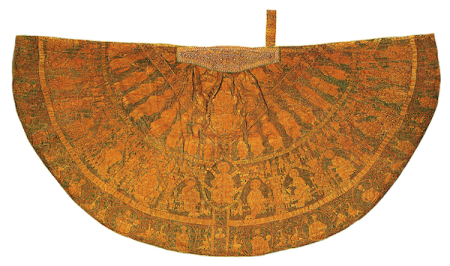 About the Coronation Mantle

The complex, yet clearly arranged composition of the mantle that survived from the first century of Hungarian Christianity shows versatility and rich details. More than eighty figures and scenes appear on it, which are depicted grouped in a geometric arrangement. In the above symbolic system of pictures, the figures highlighted by mandorlas (almond-shaped frames of glory) are provided with interpretive inscriptions. The above Latin inscriptions written in Leonine hexameters (rhymed-metrical verse form) are among the earliest relics of Latin literature in Hungary.

The wedding of Stephen and Gisela of Bavaria 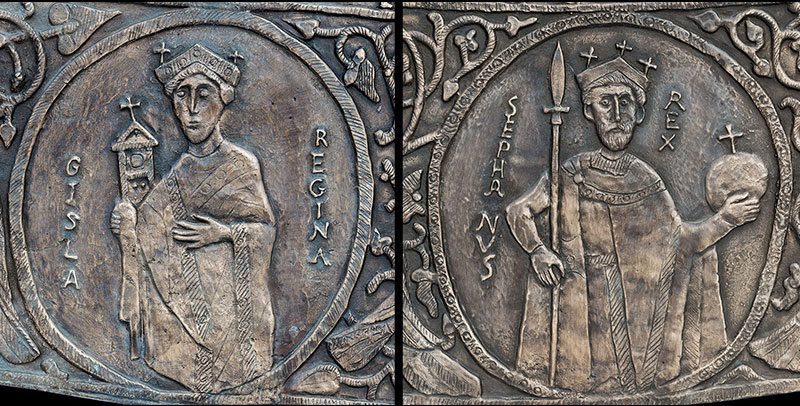 Gisela and Stephen depicted on a relief by Tibor Rieger

The wedding of Stephen, son of Hungarian Grand Prince Géza, and Gisela of Bavaria, daughter of Henry II (The Wrangler) took place in the chapel of the castle of Scheyern in Bavaria, which is referred to as King’s Chapel (Königskapell) today, in memory of the above event.

The coronation of Stephen converted the Hungarian Principality into a European Christian kingdom. His coronation provided new legitimacy to King Stephen, and it considerably contributed to increasing his prestige and international recognition. The coronation happened at the Royal Court’s seat, in Esztergom.
The coronation ceremony happened on the first day of the new millennium, which may be 25 December 1000 (according to the Julian calendar) or 1 January 1001.

Blessed Gisela, the work of Sándor Kiss at the Chapel of Our Lady, Queen of the Hungarians, Rome, Saint Peter’s Basilica, 1981. Photo: Károly Szelényi

The nunnery was founded by King Stephen. In addition to the education of women, the Veszprém Valley nuns also had the task to provide the churches built in the country with church garments. According to King Stephen’s 2nd Book of Laws “garments and altar clothes shall be provided by the King, whereas priests and books shall be provided by the Bishop”.
The vestment converted into a coronation mantle was prepared here. The ruins of the nunnery are situated in the contemporary city of Veszprém, whose cathedral was built upon the order of Gisela. The building model held in Gisela’s hand on the mantle may refer to the above fact. It was the privilege of the bishops of Veszprém to crown the queen, therefore Veszprém is referred to as “the city of queens” even today.

The Foundation of the Fehérvár Basilica

The church in the 11th century (reconstruction). Drawing: Zsuzsanna Branczeiz

Fehérvár was highly respected since the funeral of Prince Géza in 997. The most important church of the medieval Hungarian Kingdom was built here around 1018, the building of which was started by King Stephen shortly after the foundation of the kingdom. The church intended to be a venue for coronations and funerals was one of the biggest basilicas of contemporary Europe with its 60×30 m floor area and about 30 m ceiling height.
King Stephen donated the ornate vestment to the above Fehérvár Blessed Virgin Mary Basilica in 1031, and later it was converted into a coronation mantle. The name of the city of Fehérvár, i.e. Alba Civitas also appears in the inscriptions running around the mantle.

The preparation and donation of the coronation mantle

King Stephen and Queen Gisela donated an ornate vestment (chasuble) to the Fehérvár Blessed Virgin Mary Basilica. The base fabric of the bell-shaped vestment is rosette-patterned, bluish-purplish Byzantine silk, which is almost entirely covered by decoration embroidered with gold threads (its weight is 4.3 kg). The uniquely rich decoration of the vestment shows that it was prepared for a special occasion, presumably the 35th wedding anniversary of the royal couple or the thanksgiving following the unsuccessful military campaign by Conrad II Holy Roman Emperor against Hungary (1031).
The donors, as well as the date and place of donation are inscribed on the vestment in a dedication written in the Latin language.

The death of King Stephen

King Stephen died after reigning for over 40 years, on the day of the Virgin Mary’s Assumption into heaven (15 August). His state unifying, church organising and legislative work established the Hungarian State, which has existed ever since. He was left without an heir due to the early death of his son, Prince Saint Emeric, therefore before his death he dedicated the country to the Virgin Mary. The name “Regnum Marianum”, i.e. Mary’s Kingdom originates from this.
King Stephen was buried in the Fehérvár Basilica, and according to records, “his saint body was placed into a sarcophagus carved from white marble in the centre of the building”.

The conversion of the vestment into a coronation mantle

Due to its rich decoration and its relation to King Saint Stephen, the vestment became a coronation mantle.
The coronation happened within the frame of a holy mass. The ceremony began with the consecration of the King, by anointing him with sacred oil to indicate that the King reigns according to the will of God.
The conversion happened during the reign of Béla III. From this time the history of the mantle was connected to the history of the Holy Crown. The coronation mantle and the Holy Crown, with the royal sceptre, the globus cruciger (orb and cross) and the coronation sword constitute the regalia, which were guarded by the church in Székesfehérvár until the 14th century.

The last coronation in Székesfehérvár

During the time of the Turkish occupation of Hungary Bratislava was the location of coronations between 1563 and 1792. Most Hungarian kings of the House of Habsburg were crowned here.
Matthias II was crowned in 1608. The first known picture where the crown and mantle of Saint Stephen appear, is a painting of him.

Francis Joseph Charles of Habsburg-Lorraine, who came to the Hungarian throne under the name Francis I (1792-1835) was the grandson of Maria Theresa.
His coronation took place on 6 June 1792 in the Mary Magdalene Church. The church was empty at that time, and it was furnished and decorated only for this event. This was the first time that Archduke Joseph, the later palatine visited Buda, who participated in the event aged 16 at that time.

During the time of the Revolution and War of Independence

The crown case in which the coronation jewels were buried underground, Hungarian National Museum

At the time of the Hungarian Revolution and War of Independence of 1848-1849, on 23 August 1849 the regalia were buried in an iron case with simple decoration in the vicinity of the town of Orsova (today Romania) near the border.
The Holy Crown, the sword, the mantle and other regalia were hidden, buried underground for 4 years, on the bank of the River Danube, under a willow-tree. They were found in September 1853 by the imperial army. Due to humidity, all the coronation garments became disintegrated except for the coronation mantle.

The coronation of Franz Joseph

Emperor Franz Joseph and Queen Elisabeth were crowned on 7 June 1867 in the Buda Castle Church of Our Lady (Matthias Church). Following this the regalia were guarded in the Buda Castle Palace until World War II.
For the coronation of Emperor Franz Joseph in 1867, the coronation mantle weighing 4 kilograms had to be repaired. The repair work included sewing the disintegrated embroidery to the fabric layers. In addition to the above, the mantle also received new lining.

The coronation jewels in America

Delivery ceremony of the regalia returned from the United States in the dome hall of the Parliament. MTI Photo: Tamás Fényes

The regalia were in American hands for 33 years after World War II. They were kept in an American military base in Germany until 1953, then in Fort Knox in the State of Kentucky for 25 years, near the gold reserve of the U.S.
They were returned to Hungary during the time of President Carter. The delivery took place on 6 January 1978 at the Parliament.
The mantle has been guarded in the Hungarian National Museum since its return.

The bronze relief of the coronation mantle 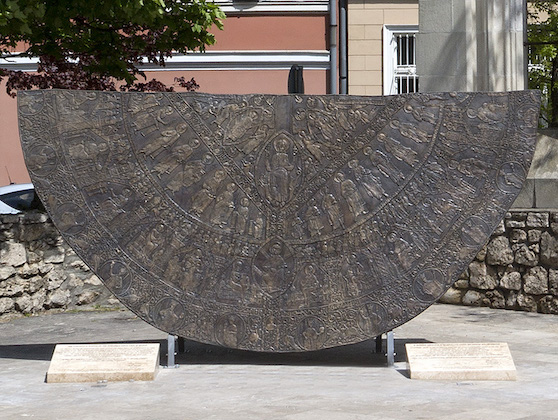 With several years of work, sculptor Tibor Rieger, recreated the almost 1000-year-old textile. His copper relief makes the spirit of King Saint Stephan’s royal court come to life.
The relief presents the depictions of the mantle in their entirety, extended in a semicircle. The semicircle-shaped bronze work of art (210 cm high and 434 cm diameter) is 1.5 times magnified compared to the original silk mantle. It authentically renders the lines of the original embroidery on the textile that are difficult to follow at some places.